Skip to content
Xi Jinping has been making trade agreements in Asia and now Europe, hoping to head off the incoming president’s efforts to rally a united front against China.

China’s leader, Xi Jinping, has in recent weeks made deals and pledges that he hopes will position his country as an indispensable global leader, even after its handling of the coronavirus and increased belligerence at home and abroad have damaged its international standing. 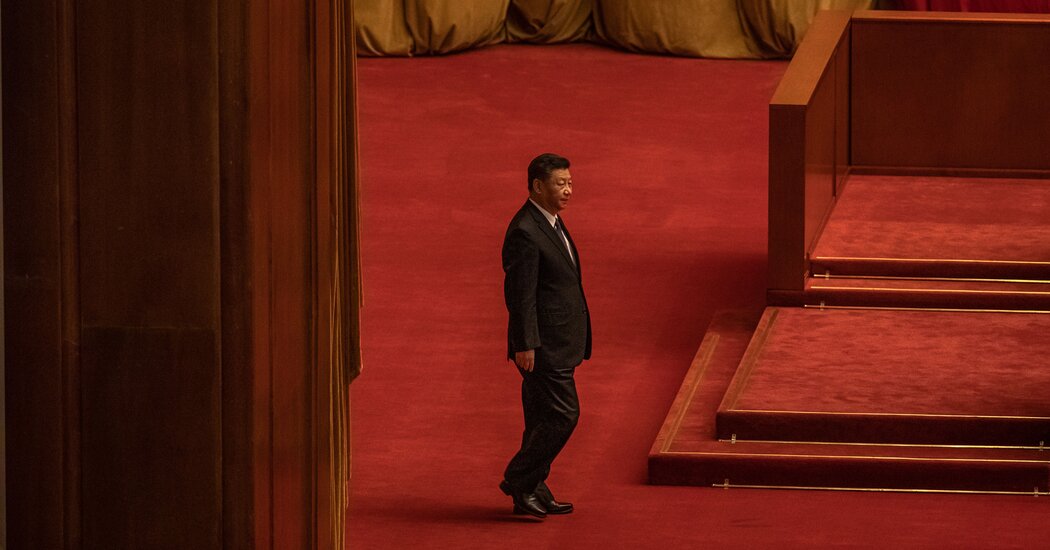 A trade pact with 14 other Asian nations. A pledge to join other countries in reducing carbon emissions to fight global warming. Now, an investment agreement with the European Union.

The deals show the leverage Mr. Xi has because of the strength of the Chinese economy, which is now the fastest-growing among major nations as the world continues to struggle with the pandemic.

In doing so, he has underlined how difficult it will be for President-elect Joseph R. Biden Jr. to forge a united front with allies against China’s authoritarian policies and trade practices, a central focus of the new administration’s plan to compete with Beijing and check its rising power. The image of Mr. Xi joining Chancellor Angela Merkel of Germany, President Emmanuel Macron of France and other European leaders in a conference call on Wednesday to seal the deal with the European Union also amounted to a stinging rebuke of the Trump administration’s efforts to isolate China’s Communist Party state.

China had to make only modest concessions to overcome increasingly vocal concerns about China’s harshest policies, including the crackdown on Hong Kong and the mass detentions and forced labor of Uighurs in Xinjiang, the western Chinese region.

Noah Barkin, a China expert in Berlin with the Rhodium Group, called the investment agreement in particular “a geopolitical coup for China.” Chinese companies already enjoyed greater access to European markets — a core complaint in Europe — so they won only modest openings in manufacturing and the growing market for renewable energies. The real achievement for China is diplomatic.

To China’s critics, Mr. Xi’s moves have been tactical — even cynical. Yet they have also proved successful to a degree that seemed impossible only a few months ago, when several European countries became more outspoken in opposing China.

China agreed, at least on paper, to loosen many of the restrictions imposed on European companies working in China, open up China to European banks and observe international standards on forced labor. The question is whether the pledges can be enforced.

Instead, China has demonstrated once again that it pays little or no diplomatic cost for abuses that violate European values. The Europeans finalized the investment agreement, for example, a day after the European Union publicly criticized the harsh prison sentence handed down to a Chinese lawyer who reported on the initial coronavirus outbreak in the city of Wuhan.

“It would be wrong to see these Chinese concessions as a significant shift in policy,” Mr. Barkin said. “Over the past year, we have seen the party tighten its grip over the economy, double down on state-owned enterprises and launch a new push for self-reliance. That is the direction of policy that Xi has mapped out and it would be naïve to believe that this deal will change that.”

China’s vast economic and diplomatic influence, especially at this time of global crisis, means that countries feel they have little choice but to engage with it, regardless of their unease over the character of Mr. Xi’s hard-line rule. The Asian trade pact, for example, while limited in scope, covers more of humanity — 2.2 billion people — than any previous one.

Australia faced a similar trade-off in November when it signed up for the Asian trade pact, the Regional Comprehensive Economic Partnership, even as China waged a campaign of economic coercion against the country.

“I think the understanding is increasing,” he added, “but how to respond is not yet clear.”

“The values we all cherish in our Sunday sermons must be adhered to if we are not to fall victim to a new systemic rival,” said Reinhard Bütikofer, a German member of the European Parliament who has spoken out against the European investment agreement with China.

That would also undercut Mr. Biden, who already must overcome four years of frustration in Europe over President Trump’s go-it-alone approach as he confronts China’s actions at home and abroad.

China’s overtures will not end the anger over its repressive policies, including its documented use of forced labor. They could mollify China’s critics, though, by using the lure of commercial profit in a country whose economy has rebounded from the pandemic more robustly than others’ have.

“Everyone has seen China’s resilience, its vitality, tenacity and its stability, especially through its fight against the epidemic,” he said.

“I think now is a very good window for us,” said Wang Huiyao, president of the Center for China and Globalization, a think tank in Beijing. He said China could serve as a model and as a partner in cooperation, and suggested that Europe could play a moderating role between China and the United States.

The country’s “Wolf Warrior” diplomacy, named after a pair of jingoistic action movies, shows no sign of relenting. Australia still faces China’s wrath, as does Canada over the detention of the chief financial officer of the Chinese technology giant Huawei at the behest of the United States.

Mr. Xi, of course, has not acknowledged that any of China’s policies have eroded global trust. Nor have officials signaled any reconsideration of its core policies.

Over the long term, it remains to be seen how significantly China’s pacts and pledges will improve its international image, which plummeted this past year because of its obfuscation over the coronavirus outbreak in Wuhan.

“I think they have a selective approach to mending their image,” said Minxin Pei, a professor at Claremont McKenna College in California.

China’s economic recovery has nonetheless given Mr. Xi a diplomatic opening, and he has seized it. Mr. Xi’s pledges to accelerate China’s reduction of carbon emissions, which he began making in September, have won international plaudits, even if the government has yet to detail how it will wean itself from coal and other heavily polluting industries.

A survey by the Pew Research Center in October found that in 14 economically advanced countries, unfavorable attitudes toward China had reached their highest levels in more than a decade. A median of 78 percent of those surveyed said they had little or no confidence that Mr. Xi would do the right thing in world affairs. (One upside for Mr. Xi: 89 percent felt the same way about Mr. Trump.)

A breakthrough came after the American presidential election. Mr. Trump showed disdain for America’s traditional allies in Europe and Asia, but Mr. Biden has pledged to galvanize a coalition to confront the economic, diplomatic and military challenges that China poses.

Around the same time, Mr. Xi showed renewed interest in wrapping up discussions for the European investment agreement, which had been dragging on for seven years. Only months before, a deal seemed all but dead amid rising animosity toward China in Europe. “Real differences exist, and we won’t paper over them,” Charles Michel, the president of the European Council, said in September.

Only two weeks after the election, China joined the 14 other Asian nations in signing the Regional Comprehensive Economic Partnership. In early December, after phone calls with Ms. Merkel and Mr. Macron, Mr. Xi pushed to finish the investment agreement with the Europeans.

Critics said the deal would bind Europe’s economy even more closely with China’s, helping Beijing expand its economic might and deflect external pressure to open up its party-state-driven economy.

The prospect raised alarm, both in Europe and in the United States. Mr. Biden’s incoming national security adviser, Jake Sullivan, took to Twitter to hint strongly that Europe should first wait for consultations with the new administration — to no avail.

The investment agreement must be ratified by the European Parliament before it can take effect, and it faces signification opposition that could derail it. For now, Chinese officials have celebrated a deal that Mr. Xi called “balanced, high-standard and mutually beneficial.”

They said the agreement failed to do enough to address China’s abuses of human rights, including labor rights. The promise that negotiators extracted from China on that issue — to “make continued and sustained efforts” to ratify two international conventions on forced labor — assumes China will act in good faith. China, critics were quick to point out, has not kept all the promises it made when it joined the World Trade Organization in 2001.

“The Chinese leadership is concerned about a trans-Atlantic front, a multinational front, against it, and it is willing to make, I think, tactical concessions to bring the Europeans on board,” Mr. Barkin of the Rhodium Group said. “They’ve been very smart about this.”