In a marathon day of opening statements, Democrats assailed Judge Barrett as a conservative ideologue who would overturn the Affordable Care Act and abortion rights, and whose nomination amounted to an illegitimate power grab by a president in the last days before the election. 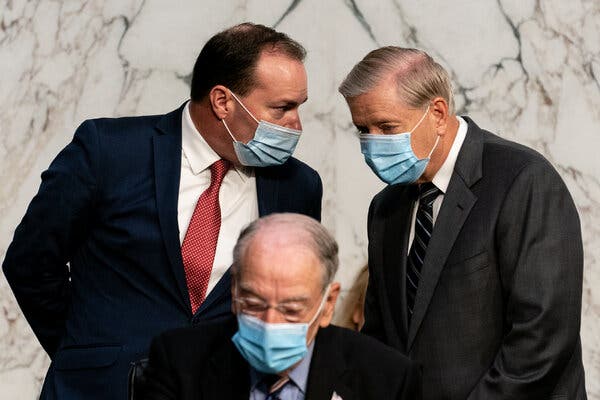 Republicans and Democrats offered sharply divergent arguments on Monday in a Supreme Court confirmation fight whose outcome is likely to steer the court to the right for years, vying to define Judge Amy Coney Barrett and frame the political stakes of President Trump’s rush to install her before he faces voters.

Judge Barrett, a former Notre Dame law professor, appeals court judge and mother of seven, sat in silence for much of the day; her expressions were rendered unreadable by a plain black mask she had donned in accordance with the Senate Judiciary Committee’s coronavirus protocol. When it was her turn to speak, she tried to avoid being pulled into the political or policy fray.

Republicans steered clear of addressing Judge Barrett’s anticipated effect on the court, instead promoting her sterling qualifications and accusing Democrats of unjustly attacking her because of her Catholic faith, despite the fact that they made no mention of it on Monday.

The two parties’ dueling approaches reflected how the confirmation hearings — a combustible endeavor in normal times — are being shaped and charged by the looming election unfolding during a pandemic. With Republicans confident they had the votes to confirm Judge Barrett and cement a lasting 6-to-3 conservative majority on the Supreme Court, they sought to energize their base by portraying Democrats’ opposition to Judge Barrett as anti-religion while reassuring wary moderates by highlighting her status as a working mother who had risen to the highest echelons of the law.

“Courts are not designed to solve every problem or right every wrong in our public life,” Judge Barrett said. “The policy decisions and value judgments of government must be made by the political branches elected by and accountable to the people. The public should not expect courts to do so, and courts should not try.”

Republicans were so confident that they announced they would expedite an already accelerated undertaking by starting the process of voting in the Judiciary Committee on Thursday morning, before the final day of confirmation hearings wraps up.

“This is probably not about persuading each other unless something really dramatic happens,” Senator Lindsey Graham, Republican of South Carolina and the committee’s chairman, said as he opened the hearing. “All the Republicans will vote yes, all the Democrats will vote no.”

“The truth is, America, that this judicial nominee has made her view so clear, and this president, is trying to put herself in a position of power to make decisions about your lives,” said Senator Amy Klobuchar, Democrat of Minnesota. “The Affordable Care Act protects you from getting kicked off of your insurance. That is on the line.”

Democrats, returning to the issue that helped them win control of the House in the 2018 midterm elections, focused relentlessly on what Judge Barrett’s confirmation could mean for the health care law, which Mr. Trump and Republicans have pressed to repeal. They filled the hearing room with large posters of Americans who had benefited from the Affordable Care Act, including its protections for pre-existing medical conditions, and offered anecdotes to illustrate what voters had to lose should it be invalidated, as the Trump administration is arguing it should be.

At 48, Judge Barrett could sit on the court for decades, with the potential to bolster a conservative majority that could have broad effects on American life, including civil rights, the powers of businesses, the ability of the government to regulate them and myriad other issues. For all the partisan rancor, senators raised no doubts about her credentials.

Judge Barrett, appearing in the hearing room with six of her seven children and her husband, seated behind her, stressed her impartiality and her personal story. Americans “deserve an independent Supreme Court,” she said in a brief statement. She invoked the memory of her mentor, the archconservative Justice Antonin Scalia, leaving little doubt about her adherence to a strict judicial philosophy that has most often led her to conservative legal opinions.

Piles of masks, pumps of hand sanitizer and a new socially distant layout awaited lawmakers inside the sparsely populated hearing room. And members of the public were not allowed in at all, casting an unusual calm over a proceeding that has stirred intense passions. Outside the Capitol complex, where protesters from the right and left gathered, some dressed in hazmat suits, at least 21 people were arrested.

The hearing, playing out during a pandemic that has killed nearly 215,000 Americans, was historic in other ways. It was the first Supreme Court hearing to feature videoconferencing, with a handful of senators, including Kamala Harris of California, the Democratic nominee for vice president, participating remotely and underscoring the risk of infection. It featured the technical difficulties to which many Americans have become accustomed while working outside the office, including when Ms. Harris’s voice echoed loudly at one point during her virtual statement, and when Patricia O’Hara, a professor emerita at Notre Dame, could not figure out how to unmute herself to give her introduction of Judge Barrett. (She later recovered and delivered glowing remarks.)

Ms. Harris was one of the Democrats who led the charge. She argued that Republicans should drop the hearings to give Americans what polls show they overwhelmingly want: an economic stimulus bill to help the millions of unemployed workers and small business owners who are struggling.

Democrats sought to capitalize on the juxtaposition, raging against Republicans’ insistence on holding a hearing in the middle of a deadly pandemic that has sickened the president and at least two Republican members of the committee after they attended the White House event that Mr. Trump held last month to present Judge Barrett as his nominee. One of those members, Senator Mike Lee of Utah, attended the hearing in person, prompting concerns although he presented a doctor’s note clearing him to be in public. Mr. Graham, for his part, refused to be retested, saying it was not necessary.

As they laid out an unusually disciplined case, Democrats said the hearing was entirely in keeping with what Senator Sheldon Whitehouse of Rhode Island called Republicans’ “hypocritical, tire-squealing 180” from 2016, when they refused to consider President Barack Obama’s Supreme Court nominee because it was an election year.

“Senate Republicans have made it crystal clear that rushing a Supreme Court nomination is more important than helping and supporting the American people who are suffering from a deadly pandemic and economic crisis,” she said, appearing by video from her office.

“To be honest about this, this president has never suffered an unuttered thought,” said Senator Richard J. Durbin, Democrat of Illinois. “It is clear that he wants this Supreme Court to eliminate the Affordable Care Act. This is his litmus test.”

But Democrats spent a majority of their time on the Affordable Care Act, reducing Judge Barrett’s confirmation to a single issue: the future of the health law that has expanded coverage for millions of Americans and grown more popular despite Republican attempts to repeal it. Dredging up her past legal writings, they argued that the judge, if confirmed, would be the decisive vote to strike down the health care law when the Supreme Court hears a challenge backed by the Trump administration days after the election.

In one Twitter post, sent not long after Mr. Graham explained why it was important for Judge Barrett to face a thorough, bipartisan vetting, the president said Republicans were giving Democrats too much time “to make their self serving statements relative to our great new future Supreme Court Justice.” He suggested cutting off the hearing and approving “STIMULUS for the people!!!”

An irritated Mr. Trump appeared to be watching from the White House, where he is still recovering from his own case of the virus, offering commentary as the day wore on. In many cases, it was not entirely helpful to Republicans.

“The legal questions before the court this fall are entirely separate,” he said.

A few Republicans tried to fend off the health care-related charges. Senator Charles E. Grassley of Iowa, the committee’s former chairman, said Democrats were basing their attacks on a legal argument Judge Barrett had made about a different portion of the law than the one currently in question.

Senator John Cornyn, Republican of Texas, said his constituents “want to know how you do it. How do you and your husband manage two full-time professional careers and at the same time manage your large families?”

For the most part, though, Republicans largely bypassed the policy implications of the court’s rightward tilt in favor of Judge Barrett’s personal story. Trailing in the polls, they were working to use the confirmation fight to stoke enthusiasm among their base but also coax back independent voters, especially women, who are abandoning the party in droves.

Several Republican senators tried to put the Democrats on the defensive by accusing them of targeting Judge Barrett over her Catholic faith, even though no Democrat mentioned or even alluded to it.

“I’ll bet there are many young women, like my own two daughters, who marvel at the balance you have achieved,” he added.

Because no Democrat has raised Judge Barrett’s religious beliefs since her nomination to the Supreme Court, he and other Senate Republicans repeatedly cited the 2017 hearing on her nomination for an appeals court seat, when some Democrats questioned whether she could set aside personal beliefs rooted in her religion to rule impartially.

Senator Joni Ernst, an Iowa Republican in a tough re-election fight, argued that attacks on Judge Barrett’s faith were also a sexist attempt to diminish her record of accomplishment.

“This committee is not in the business of deciding whether ‘the dogma lives too loudly’ within someone,” said Mr. Sasse, referring to a comment by Senator Dianne Feinstein of California during that proceeding.

Judge Barrett has identified Catholicism as a central aspect of her life. She is part of an insular religious community, the People of Praise, that has fewer than 2,000 members and is inspired by the traditions of charismatic Christianity, including speaking in tongues.

“What your political opponents want to paint you as is a TV or cartoon version of a religious radical, a so-called handmaid that feeds into all of the ridiculous stereotypes they have set out to lambaste people of faith in America,” Ms. Ernst said. “And that is wrong.”

Until recently, the group called female leaders “handmaids” but recently dropped the term after the popular TV adaptation of the dystopian novel “The Handmaid’s Tale” gave the term a sinister cast.