Skip to content
At a rally that was supposed to bolster the fortunes of two Republican runoff candidates, the president instead turned the event into a lecture filled with conspiracy theories and personal attacks.

In an appearance that was supposed to bolster the fortunes of the two Republican candidates — Senators David Perdue and Kelly Loeffler — Mr. Trump instead turned the nearly 90-minute rally into a rambling lecture filled with conspiracy theories, rumors, unproven assertions and personal attacks on Democrats, the news media and Georgia’s Republican officials. 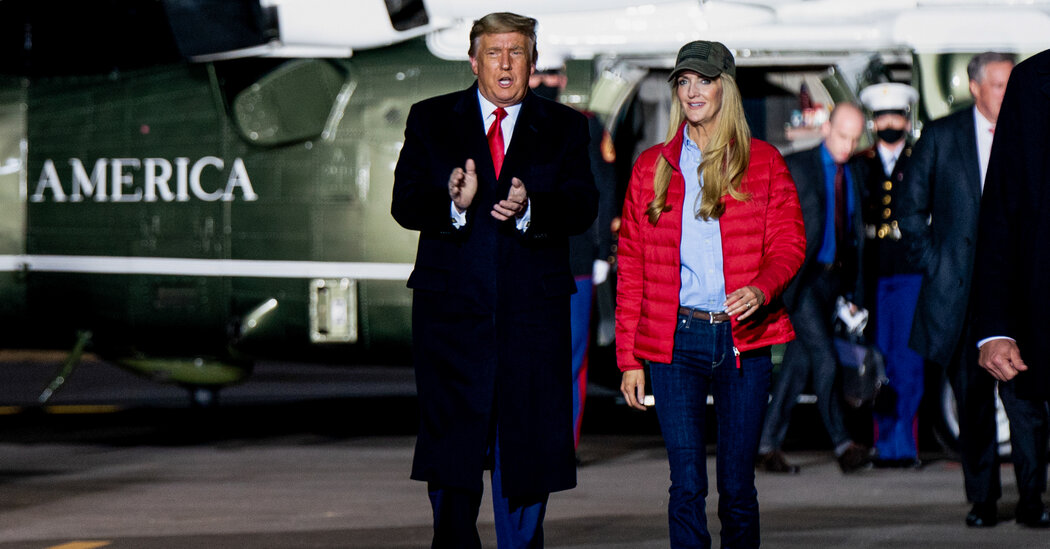 DALTON, Ga. — President Trump used a campaign rally on the eve of two critical Senate runoffs in Georgia to once again vent his debunked grievances about the outcome of November’s presidential election, as he continued his assault on the peaceful transfer of power.

Moments later, after briefly mentioning the two Republican senators, he shifted back to his own, losing election: “They’re not going to take this White House. We’re going to fight like hell, I’ll tell you right now.”

“There’s no way we lost Georgia,” Mr. Trump said just after taking the stage. “I’ve had two elections. I’ve won both of them. It’s amazing.”

With Mr. Biden’s inauguration 16 days away, Mr. Trump and his allies have turned their attention to Wednesday’s joint session of Congress, where scores of Republicans in the House and Senate say they will object to Mr. Biden’s victory being certified in what is usually a largely ceremonial event. Their effort is certain to fail, given Democratic control of the House, and it has split the Republican Party.

The performance, which he foreshadowed on Twitter earlier in the day, underscored the president’s attempts to find a way to reverse his loss to President-elect Joseph R. Biden Jr., even at the risk of alienating Republican voters in Tuesday’s Senate contest, which observers in both parties expect to be close. If Democrats win both runoffs, they will take control of the Senate.

But he quickly returned to complaining about his own political fate.

“If you don’t show up, the radical Democrats will win,” he said to a large, cheering crowd at an airport hangar, with Marine One, the president’s helicopter, in the background.

The party’s top lawmakers, including Senator Mitch McConnell of Kentucky, the majority leader, have rejected Mr. Trump’s claims of widespread voter fraud and said it is time to accept Mr. Biden as the next president. Others in the party, including a dozen senators and Representative Kevin McCarthy, the House Republican leader, have embraced at least the idea of challenging the certification.

In his tweet, the president suggested that Mr. Cotton — a staunch conservative and Trump supporter — should prepare to be challenged in a primary.

Mr. Trump appears to have little patience for those who resist his call for overturning the election. In a tweet on Monday morning, he admonished Senator Tom Cotton, Republican of Arkansas, for saying that challenging the certification could only “erode further our system of constitutional government.”

On Monday night, Mr. Trump noted Senator Mike Lee, Republican of Utah, was at the rally, but said he was “a little angry with him.” Mr. Lee has said he will not support objections to the election’s certification.

“How can you certify an election when the numbers being certified are verifiably WRONG,” Mr. Trump tweeted, adding: “@SenTomCotton Republicans have pluses & minuses, but one thing is sure, THEY NEVER FORGET!”

The conversation prompted calls by Democrats for Mr. Trump to be prosecuted for illegally trying to induce state officials to commit voter fraud. And it spurred outrage from officials in Mr. Raffensperger’s office, who accused the president of improperly trying to undo the results of a fair election.

On Saturday, the president delivered vague threats of criminal prosecution to Brad Raffensperger, the Georgia secretary of state, during a rambling telephone call. Mr. Trump pressured Mr. Raffensperger to “find” him enough votes to reverse the presidential contest in the state.

It was like “Groundhog Day,” he said with evident frustration, adding of the fraud claims, “This is all easily, provably false, yet the president persists, and by doing so undermines Georgians’ faith in the election system.”

Gabriel Sterling, a top election official in Georgia, delivered a scathing refutation on Monday of Mr. Trump’s false claims of voter fraud, running through a long list of debunked conspiracy theories and systematically debunking each one again.

The president had previewed his rally remarks on Twitter hours before his departure from Washington, saying that he would reveal at Monday night’s event “the real numbers” about the fraud that he claims happened during the Georgia presidential contest.

But he returned again and again to his own election, attacking Mr. Raffensperger and Gov. Brian Kemp, a Republican, saying: “They say they are Republicans. I really don’t think so. They can’t be.” The president also vowed that he would “be here in a year and a half campaigning against your governor — I guarantee you that.”

“You’ve got to swarm it tomorrow,” he told his supporters, urging them to cast ballots for Ms. Loeffler and Mr. Perdue.

Mr. Trump said Republicans were able to ride “my coattails” to victory and pick up seats in the House despite pre-election projections.

The president recited a litany of fake statistics that he said proved the election was stolen from him in Georgia, despite the fact Mr. Raffensperger and state officials had repeatedly told him his assertions were patently false.

That was false. The incoming president’s party has lost ground in Congress in several recent elections. In the 2000 elections, Republicans lost three House seats despite President George W. Bush’s victory. In the 1992 election, President Bill Clinton defeated the incumbent president but Republicans made “unexpected” gains in Congress.

“I was leading in Pennsylvania by hundreds of thousands of votes,” he said. “All of a sudden — I was tired — I said, ‘What happened?’”

And Mr. Trump lamented the legitimate vote counting process, falsely claiming that “they keep finding votes” in his and other Republican races.

In addition to using the Georgia rally to try to increase turnout among Republicans in Tuesday’s voting, Mr. Trump kept returning his focus to himself, even as his party is trying to save the Republican majority in the Senate.

What happened was the legitimate vote counting process. Mr. Trump’s lead shrank in Pennsylvania and several other states as election officials continued to count mail-in ballots.

The event was billed as a final rally for Ms. Loeffler and Mr. Perdue, but the crowd was there for Mr. Trump and Mr. Trump alone. Supporters said they backed his unfounded efforts to subvert the election results and his attempts to pressure the Georgia secretary of state into finding the necessary votes.

Die-hard supporters of Mr. Trump, including thousands who believe he is the rightful winner of a 2020 election rife with voter fraud, packed a regional airport in northwestern Georgia for the president’s remarks.

“Not without President Trump on the ballot,” Mr. Gilley said as he waited for the president to arrive from Washington. “We’re here for him and we support him.”

Tim Gilley, 65, who lives in Dalton, said he did not expect Mr. Perdue or Ms. Loeffler to win on Tuesday.

“I thought it was another instance of him fighting for us,” Mr. Gilley said.

Mr. Gilley also defended Mr. Trump’s call with the secretary of state, saying the president was only stating what others saw.

At the same time, another man tried to start a chant among the crowd: “Joe Biden is a communist agent,” he yelled.