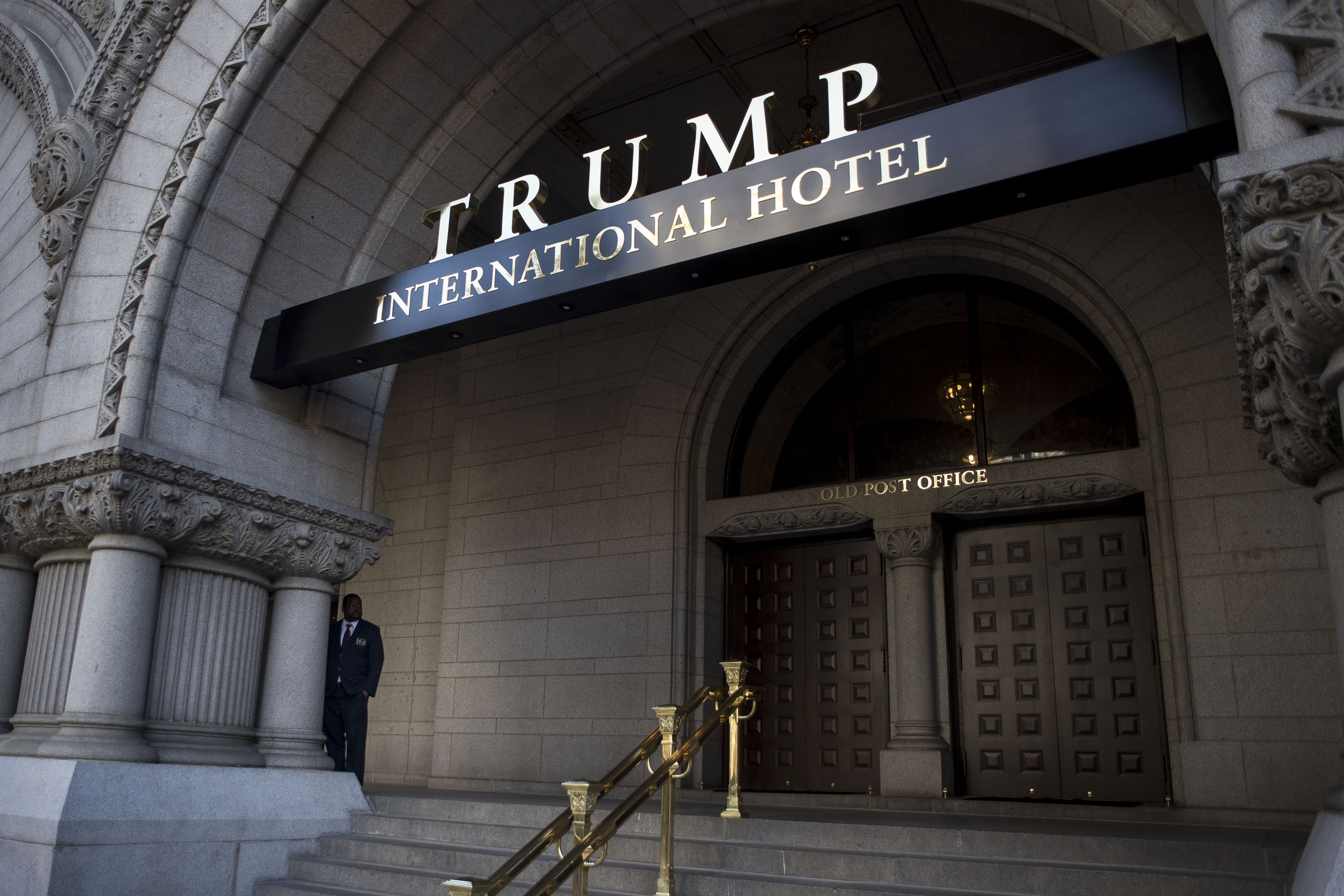 Trump hotel looks to cash in on Biden inauguration

As Trump allies plot a last-ditch effort on Jan. 6 to try to prevent Joe Biden from being formally selected as the next president, at least one part of Trump-world is tacitly acknowledging that there won’t be a second Trump term, and is hoping to profit from Biden’s inauguration: Trump’s Washington hotel.

A check of the Trump International Hotel D.C.’s website indicates that the hotel demands a two-night minimum stay during the inauguration. | Gabriella Demczuk/Getty Images

But a receptionist at the Trump hotel in Washington told POLITICO on Wednesday that there are no inauguration specials and the hotel is not planning on having any private events either before hanging up the phone as a POLITICO reporter tried to ask a follow-up question.

A check of the Trump International Hotel D.C.’s website indicates that the hotel demands a two-night minimum stay during the inauguration and has hiked its rates to $2,225 per night for Jan. 19 and 20, while a similar room runs in the $400 range during most of the rest of January.

“That’s all I have to comment, OK? You have a great New Year’s. Bye now!” Tang said before also hanging up the phone in the middle of a follow-up question. She didn’t reply to a follow-up email, but a reservation specialist said there were “plenty” of rooms available.

When asked the same question, Patricia Tang, a spokesperson for the hotel, referred POLITICO to the hotel’s website when asked if there are any special inauguration promotions.

We’re getting tons of inquiries from Democrats for the inauguration, Trump hotel manager Mickael Damelincourt and food and beverage manager Daniel Mahdavian told Deason in mid-December, according to Deason. “They thought they were going to do very well.”

Trump has at times projected confidence that he’ll be able to overturn the election results, but there are few signs that his allies consider it a serious possibility. Major Trump donor Doug Deason, for instance, stayed at the hotel four years ago and said in an interview that he would stay there again if Trump somehow pulled out a win. But he was not aware of any plans to celebrate that vanishingly unlikely outcome at Trump’s Pennsylvania Ave. property, a buzzing hive of activity in 2017.

“The Trump is the nicest hotel in D.C. and most certainly the nicest hotel w/in the secure zone during the inauguration,” Deason added in a text message. “The Democrat guests will find it very comfortable and accommodating regardless of party affiliation.”

“I can’t imagine I’m invited [to Washington] if Biden” is inaugurated, Deason joked. Damelincourt and Mahdavian did not respond to requests for comment.

This may be the last inauguration for which Washington has a Trump hotel. The Trump Organization, run by President Donald Trump’s sons Eric and Don Jr., has tried to sell its lease for the property, but sales efforts have reportedly been put on hold after no offers came close to the $500 million asking price.

Trump’s 2017 inauguration led to the D.C. attorney general suing his inaugural committee and the Trump Organization arguing that the committee violated D.C. nonprofit laws by spending more than a million dollars to reserve a high-priced ballroom at the Trump hotel.

The Hay-Adams hotel, which is close to the White House, has increased its rates up to $1,399 per evening around the inauguration, which is much higher than than the normal rates these days of a room in the mid to upper $300 range, according to its website, and a receptionist said that they have “certainly” seen some demand for rooms but declined to say how many people have purchased.

Other ritzy D.C. hotels, which have suffered during the slowdown in travel because of the pandemic, are also trying to capitalize on any Democrats coming to town for the much-scaled down inauguration.

With the inauguration hosting no actual inaugural balls, the Rosewood hotel in Georgetown is offering an “intimate inaugural ball” for up to six people in the presidential suite or one of their townhouses. The three-night package, which starts at $4,000 a night, offers a catered in-room screening of the ceremony, a reception with hors d’ oeuvres, and a three-course dinner with wine pairings. Samantha Lynch, a sales manager at the hotel, said they’ve received “a lot of interest but still have some availability.”

The St. Regis in downtown Washington also has hiked rates during the inauguration to at least $999 per night, which a similar room would often go for $399 per night.

There have been rumblings that Trump could announce that he plans to run again for president on Jan. 20 instead of attending his successor’s inauguration as outgoing presidents usually do. When previously asked about Trump’s Jan. 20 plans, White House deputy press secretary Judd Deere told POLITICO: “Anonymous sources who claim to know what the President is or is not considering have no idea. When President Trump has an announcement about his plans for Jan. 20 he will let you know.”

Because of the pandemic, the Biden inaugural committee is urging average Americans not to attend the inauguration, but said two weeks ago that Biden would be sworn in on the west side of the Capitol and will address the country from the platform. There will also be some type of parade, but there won’t be the traditional congressional luncheon.

A Facebook group is organizing a “Donald J. Trump 2nd Presidential Inauguration Ceremony,” although what they have planned is unclear. More than 67,000 people have signed up for the event.

The Trump campaign did not respond to questions about its plans for the inauguration.

“We have made no decision,” said Matt Schlapp, a Trump ally and chairman of the American Conservative Union, in a text message. “We escaped w fellow conservatives for both Obama’s inaugurations to the [Virginia] mountains. Right now we are focused on Georgia and ending illegal voting nationwide.”

Although a number of Democrats escaped D.C. during Trump’s inauguration four years ago, some prominent Republicans haven’t decided if they are going to leave town this time to avoid Biden’s inauguration.

But the bookings don’t exactly appear to be rolling in so far.