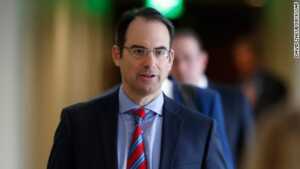 Officer Levi Huffine was fired in February over the August 2019 incident but earlier this week, police made public video of the incident and Huffine testified at an appeal hearing.
Body camera footage shows the woman being handcuffed, taken to a police car and later her hands and feet were hog-tied using a soft restraint hobble.
Police officers can be heard saying in the video that the woman, identified as 28-year-old Shataean Kelly by CNN affiliate KCNC, was trying to escape the patrol car. CNN has reached out to Kelly for comment.
For 21 minutes, she repeatedly asked for help and said that “she did not want to die like that,” according to a summary of evidence document posted on the Aurora Police Department’s website. The woman was detained for “multiple municipal charges” after she was involved in a fight, according to the document.
The officer “did not stop the car and physically check on her or reposition her to a safe and appropriate position on the rear seat,” the document states.
Video from a camera inside the patrol car shows the woman, with her hands and feet restrained, lying face down on the backseat of the police car after she was initially placed inside the car. About three minutes later, her body slides off the back seat and she appears to come to rest with her face on the floorboard.
“Hey, my head is about to break bro and my neck is about to break bro. Can you lift me up? Hey officer, I can’t breathe, I can’t breathe, please help me please, please help me please,” she says from the floor of the car.
A few minutes later Kelly is heard saying, “This hurts, can you drive faster, it hurts so bad. It hurts so bad!” before she starts to scream.
Two minutes later, Kelly says in a more subdued voice, “Are we almost there sir, can you please hurry my neck really hurts, my neck really hurts, sir. My neck really hurts bad. I’m crushed up under your chair right now, sir, I would really appreciate it if you let me up.”
When the patrol car arrived at the jail, a female officer opens the door of the car and asks, “Honey, why are you head down like that?” The officer then reaches into the car and begins working to remove the contorted woman.
Minutes later, with the woman still in the car, a female officer shuts the door and says to Huffine, “That didn’t look pleasant at all.” Huffine replies, “She was in the seat, but she decided she wanted to roll, so.”
It took about three minutes before officers were finally able to remove Kelly from the car and walk her into the station.
Aurora Police announced in February that Huffine was terminated. He is appealing his termination and testified during an appeal hearing before Aurora’s civil service commission this week.
“Looking back in hindsight, I’m very remorseful that I continued and I made the choices, but I didn’t know she was in that position. I’m sorry. It was a mistake. But I had no clue she was in an inverted position in the backseat of my car,” KCNC reported Huffine saying during the hearing.
KCNC reported that an internal police review board recommended a 180-hour suspension for Huffine but Aurora Police Department Chief Vanessa Wilson overruled that recommendation.
“That’s not what we are hired to do. We are not judge, jury and executioner. We are not to treat people inhumanely like they don’t matter,” Wilson said in the hearing.
The four-member commission will issue a written ruling at a later date either upholding Huffine’s firing or giving him his job back, KCNC reported.
Neither Wilson or the department are providing further comments on the hearing or the case, pending the commission’s decision, police said in a statement.
Kelly told TV station KDVR in Denver, Colorado, that she was “bawling tears” after seeing the video of her arrest and said she supports Huffine’s termination.
“Animals don’t even deserve to be treated like that, and what you did was you treated me less than the dirt on the ground,” Kelly said.