Celebrating International Coffee Day: For the Love of Coffee

According to the International Coffee Organization “there are more than 25 million small coffee farmers and their families who produce 70% of the world’s coffee and are particularly affected by fluctuations in market prices and imbalances in supply and demand.” Fluctuations can be caused by several factors, as was the case in the 1940s.

The following is a guest post by Jacquelyn Deppe, an intern with the Digital Resources Division of the Law Library of Congress. She is a graduate student of the Masters of Information program at Rutgers University. International Coffee Day is celebrated in the United States on September 29, and internationally on October 1.

In order ease the fears of both regions, the multilateral Inter-American Coffee Agreement was signed on November 28, 1940, by the governments of Brazil, Colombia, Costa Rica, Cuba, the Dominican Republic, Ecuador, El Salvador, Guatemala, Haiti, Honduras, Mexico, Nicaragua, Peru, the United States of America, and Venezuela.

During World War II, the closure of European coffee markets gave rise to widespread panic. While those in Latin America feared the continuing decline in coffee prices, the United States worried the drop would turn Latin American countries to Nazism or Communism.

While this agreement expired in 1948, it would not be the last time an agreement on coffee would be made under similar circumstances. In 1962, during the Cold War, the International Coffee Agreement and the International Coffee Organization were created “because of the great economic importance of coffee.” The new agreement was negotiated at the United Nations headquarters in New York, once again involving the United States of America, Latin American countries, and other coffee-producing countries from around the world.

The Inter-American Coffee Agreement established quotas for coffee-producing countries involved in the agreement in an “effort to promote the orderly marketing of coffee in international trade, with a view to assure equitable terms for both producers and consumers by adjusting supply to demand.” (Inter-American Coffee Agreement, preamble, Nov. 28, 1940, 55 Stat. 1143, 1146.)

The International Coffee Agreement is still in effect today and includes more coffee-producing countries than the previous agreements, totaling 43 exporting members. The International Coffee Organization states the major objective is “to strengthen the global coffee sector and promote its sustainable expansion in a market-based environment for the betterment of all participants in the sector.”

Most of the world’s coffee comes from small farms in developing countries that have a specific climate suited to growing coffee. While there is no threat of war, as was the case when the Inter-American Coffee Agreement and the International Coffee Agreement were signed, the current International Coffee Agreement is still looking to aid developing countries, which are the main producers of coffee for the rest of the world, by helping them to sell the coffee they grow and produce. To find more interesting treaties, see the United States Treaties collection. on the Law Library of Congress‘s website. 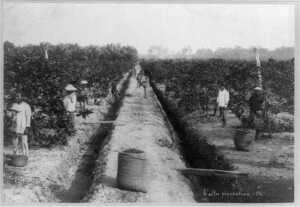 The following is a guest post by Jacquelyn Deppe, an intern with the Digital Resources Division of the Law Library of Congress. She is a graduate student of the Masters of Information program at Rutgers University. International Coffee Day is celebrated in the United States on September 29, and internationally on October 1. According to […]