Skip to content
A top election official condemned President Trump’s baseless attacks on voting integrity, as the president and Joe Biden rallied support for their candidates in the crucial Senate runoffs.

The official, Gabriel Sterling, ticked off a point-by-point rebuttal of Mr. Trump’s grievances about his loss in Georgia to Joseph R. Biden Jr., which the president aired most recently over the weekend in a phone call with Secretary of State Brad Raffensperger, a fellow Republican. Mr. Trump pressured Mr. Raffensperger during the conversation to “find” votes to overturn his general election loss. 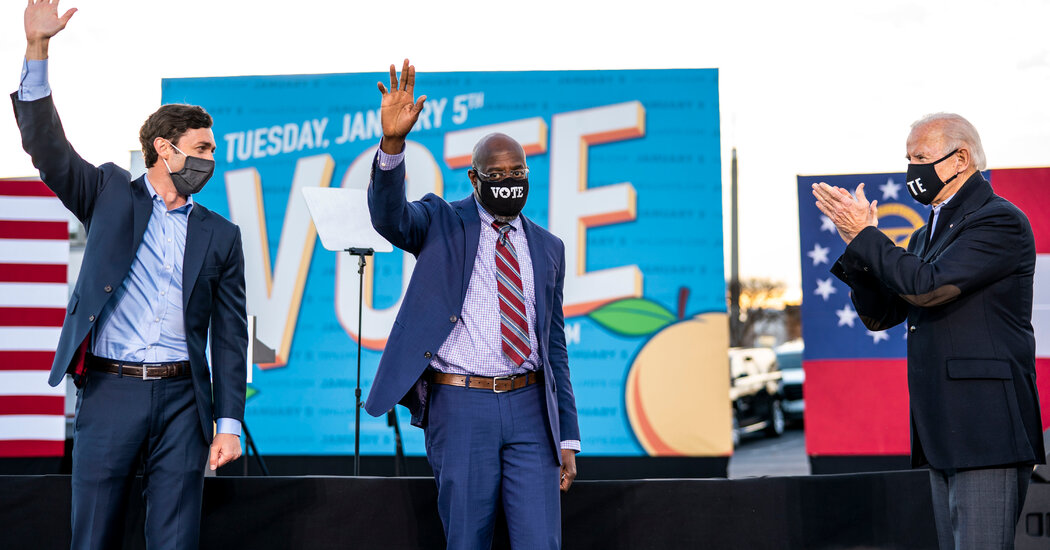 ATLANTA — On the eve of Georgia’s high-stakes Senate runoffs, a top state election official on Monday delivered a stinging condemnation of President Trump over his false claims of voter fraud, and issued an emotional appeal to Georgians to ignore the president’s disinformation and cast their ballots on Tuesday in a race that will determine control of the Senate.

“I personally found it to be something that was not normal, out of place, and nobody I know who would be president would do something like that to a secretary of state.”

“I wanted to scream,” Mr. Sterling said at an afternoon news conference, referring to his reaction to the call between Mr. Trump and Mr. Raffensperger. Mr. Sterling, the state’s voting system implementation manager, said the president’s allegations of fraud had been “thoroughly debunked.”

The president and Mr. Biden were making last-ditch efforts to sway the outcome of the two runoff races that decide not just which party will control the Senate but the arc of Mr. Biden’s first-term policy agenda. If the two Democratic challengers, Jon Ossoff and the Rev. Raphael Warnock, both win, Democrats will control the White House and both chambers of Congress.

His sharp rebuke offered the most vivid example of how Mr. Trump’s sustained assault on Georgia’s voting integrity has roiled the state’s politics ahead of Tuesday’s runoffs. Even as Mr. Trump prepared to campaign in Northwest Georgia on Monday night for the two Republican incumbents, Kelly Loeffler and David Perdue, party officials worried that his unfounded claims of a rigged election would depress turnout among their base.

The Democrats were trying to steal the White House, he told the crowd, so they could not afford to let them steal the Senate.

At his rally Monday night in Dalton, in northwest Georgia, Mr. Trump recycled his baseless claims that he was the victim of electoral fraud, and he promised to fight on. “That was a rigged election, but we’re still fighting, and you’re going to see what’s going to happen,” he said. Mr. Trump also called Tuesday’s vote “one of the most important runoff elections in the history of our country,” and praised Mr. Perdue and Ms. Loeffler.

He repeated his bogus assertion that he won “by a landslide” and said that he hoped Vice President Mike Pence “comes through for us,’’ an allusion to Mr. Pence’s role presiding over Congress when it meets to certify Mr. Biden’s victory on Wednesday. “He’s a great guy,” he said of Mr. Pence. “Of course, if he doesn’t come through I won’t like him quite as much.”

“As our opposition friends are finding out, all power flows from the people,” said the president-elect, adding that politicians cannot “seize power.”

Addressing a few hundred supporters splayed out on the hoods and roofs of their cars in a downtown parking lot, Mr. Biden said Mr. Trump was absorbing a harsh lesson in democracy.

“It’s not hyperbole, you can change America,” he said.

Clad in a black mask emblazoned with the word “VOTE,” Mr. Biden encouraged the multiracial audience of Georgians to do just that.

Hours before Mr. Trump’s appearance in Dalton, many of his die-hard supporters defended his phone call to Mr. Raffensperger.

That was the heart of Mr. Sterling’s message as well as he implored voters to head to the polls on Tuesday. “If you’re a Georgia voter, if you want your values reflected by your elected officials, I strongly beg and encourage you, go vote tomorrow,” he said. “Do not let anybody discourage you. Do not self-suppress your own vote.”

Mr. Fitzgibbons cited many of the same debunked claims that the president made.

Neal Fitzgibbons, of Kennesaw, said the president just wanted the secretary of state “to look really closely at all the irregularities we saw.”

“Things were questionable, if not downright thievery, and should be looked at,” he said.

And Democrats are making the case that Mr. Trump sought nothing less than to nullify the will of the electorate and undermine Democracy with his call to Mr. Raffensperger.

As they have throughout the race, Republicans continued to warn on Monday of a dire slide into a hard-left socialism if Democrats gain control of both Congress and the White House.

Standing before an image of an American flag and twin screens that declared, “DEFEND THE MAJORITY,” Mr. Pence said, “We need Senators David Perdue and Kelly Loeffler to get in the way of the radical left agenda in Washington, D.C.,” as the crowd broke in with chants of both “Four more years” and “Stop the steal.”

Earlier in the day, Mr. Pence amplified the Republican message in a visit to a megachurch in the central Georgia city of Milner.

Nonetheless, Georgia elections officials on Monday had received at least two formal calls for investigations into whether Mr. Trump had violated state laws.

Mr. Pence did not mention the president’s phone call on Saturday to Mr. Raffensperger, which was first reported by The Washington Post. A number of legal scholars said that the president may have violated state and local laws, although they also said that pursuit of criminal prosecutions would be unlikely.

“The president of the United States on the phone trying to intimidate Georgia’s election officials to throw out your votes,” Mr. Ossoff said to a gathering of volunteers preparing to go canvassing. “Let’s send a message: Don’t come down to Georgia and try to mess with our voting rights.”

In an appearance on Monday in Conyers, a suburb east of Atlanta, Mr. Ossoff, the head of a video production company who is challenging Mr. Perdue, sought to draw parallels between Mr. Trump’s phone call and Georgia’s long history of voter suppression and disenfranchisement.

Hillary Drummond Simpson, a retired elementary and middle schoolteacher, said that she was left puzzled by the support that the president still had. “I don’t get it,” she said. “I don’t understand what they are looking for in a leader.”

Among rank-and-file Democrats, the president’s phone call only added to their anger and their desire to push the senators who have so closely aligned themselves with Mr. Trump out of office.

Ms. Loeffler, a wealthy businesswoman facing off against Mr. Warnock, deflected questions about Mr. Trump and his phone call as she campaigned around the state before heading to join the president Monday night. “My sole focus is on tomorrow, Jan. 5,” she said at an Atlanta-area airport.

Verdaillia Turner, who was in Conyers to help with canvassing, said she thought the president’s strong-arm tactic might help Democrats build momentum. “It’s like a perfect, beautiful storm, and all eyes are on us,” said Ms. Turner, the president of the Georgia Federation of Teachers.

Mr. Perdue, who has been quarantined because of a possible exposure to the coronavirus, appeared Sunday night on a Fox News program where he said that he did not think the president’s pressure campaign on Mr. Raffensperger would affect the election.

At the rally Monday night, and earlier in a tweet, Ms. Loeffler said that she would join the dozen or so U.S. senators on Wednesday to vote against the certification of the election results granting Mr. Biden’s victory.

He also defended Mr. Trump’s assertions about electoral fraud. “What the president said is exactly what he’s been saying the last few months, and that is, the last two months anyway, we’ve had some irregularities in the election in November and he wants some answers. He has not gotten them yet from the secretary of state.”

Mr. Perdue blamed Mr. Raffensperger for the leaked recording of the one-hour conversation.

Officials in Fulton County said that 370,000 ballots had already been cast there. While not specifically mentioning Mr. Trump, the Fulton County elections director, Richard Barron, addressed an “audio recording late yesterday” in which Fulton County was mentioned more than a dozen times.

Though Georgia has suffered a number of problems administering elections of late, with long lines, delayed results and technical glitches, some elections officials expressed confidence that Tuesday’s election would go smoothly.

“There’s been a great deal of misinformation out there,” Mr. Barron said. “We don’t have the resources to respond to each one of them. And we’ve been focusing on preparing for tomorrow and conducting the election legally and fairly.”

In the tape, Mr. Trump made a number of claims about election fraud by Fulton County, including allegations of what he called “ballot stuffing.” Mr. Raffensperger’s office said those claims were investigated and rejected as unfounded.

He added that Mr. Raffensperger does not have a brother named Ron who works for a Chinese technology company, as one of the conspiracies retweeted by the president claims.

At his news conference, Mr. Sterling spent some time going through numerous individual false claims made by the president or his lawyers. They have claimed that thousands of votes were cast in Georgia by people who were under 18, weren’t registered to vote, registered late or registered with a post office box instead of a residential address. The secretary of state’s office investigated the claims, Mr. Sterling said, and did not find a single ballot cast by anyone in any of those categories.

Richard Fausset and Rick Rojas reported from Atlanta, and Maggie Astor from New York. Reporting was contributed by Astead W. Herndon from Dalton, Ga., and Stephanie Saul and Shane Goldmacher from New York.

In fact, Mr. Sterling said, Mr. Raffensperger does not have a brother named Ron at all.